The fourth London DevOps Enterprise Summit kicked off in London today and the CEO of the DevOps Institute, Jayne Groll, talked about ITIL4 and SRE. Jayne asserted that value is only created when you use a service and that service management is still relevant – this hasn’t changed in DevOps. It will always need to be managed but the way it is managed is different in DevOps.

Jayne explained that Google says SRE is their approach to service management – all about operations; unlike ITIL4 which tries to cover the whole service delivery lifecycle.

We have to shift items left in the First Way to improve the flow. In the Second Way we have to increase feedback. The Third Way says you can’t become a master if you don’t practice. You have to have the ability to learn and fail – mindfully and fast (recover quickly) – and have the opportunity to continuously learn.

Jayne said, with reference to that final bullet:

“We automated the rest of the world, but we forgot to automate ourselves.”

Jayne said that SRE is not the counterbalance to ITIL but reinforces the principles alongside DevOps. SRE has come from a different community from DevOps and has been spawned by Google’s book but has become a job role in its own right, as the hands raised in the audience showed when we were asked if we were SREs.

“We are used to micro-managing but this is a self-regulating environment. In the past “fail” wasn’t in our vocabulary.”

“The crossroads between ITSM and DevOps is as change management. Not everything needed to go through the CAB – this is how people interpreted it. ITIL suggested change models. If your environment needs to have more governance, you do need more regulatory control, you can do peer-to-peer reviews – risks have to be assessed and change schedules need to be managed. But in SRE you get an error budget – a metric that determines how unreliable the service is allowed to be in the quarter. The budget should be spent; but not overspent – and if it is overspent, there are consequences.”

Jayne concluded with the message that agile and ITSM are not mutually exclusive – you can choose what to adopt and what to adapt. DevOps is like a super-framework – a framework of frameworks. These are her principles to follow: 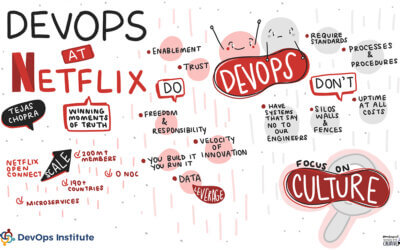